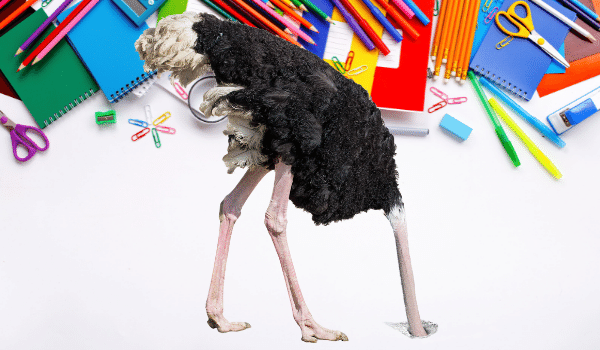 There is an ancient Roman myth that the Ostrich will bury its head in the sand when faced with a threat. The basis of the myth is that it's easier to avoid the threat than it is to confront it.  Luckily, since the probability of suffocation would be very high when burying your head in the sand, this is just a myth.  Ostriches don't REALLY bury their heads in the sand to avoid threats, but it seems that, proverbially, humans do just that.  If we do not see it, it won’t hurt us, right?

The ostrich effect is a cognitive bias that causes people to avoid information that they perceive as potentially unpleasant.  Information avoidance can lead to detrimental outcomes in a variety of situations, so it’s important to understand it.

There are an alarming number of schools that are seemingly falling victim to this ostrich-effect thinking when it comes to violence in schools.  As districts place bandaids on the issues, they are not allocating the resources needed to actually fix the problem.

The sad reality is that many schools are significantly behind the eight-ball when it comes to keeping our children safe in school.  Providing a comprehensive safety and security protocol is necessary, not optional.   Even when faced with the facts that 2021 ushered in 693 mass shootings with 2,844 Injured and 702 Killed, many still believe that it will not happen to them.  This is a dangerous misconception and is the textbook definition of the ostrich effect.  School violence is at an all-time high in the United States and many security experts predict that it will continue to worsen with time.  Already in 2022 (as of 1/23/22), there have been 27 mass shootings resulting in 91 injuries and 34 deaths.  Add to that the mental health issues we are experiencing since the start of the pandemic, and it's easy to see the urgency we face.

Quarantine and self‐isolation can most likely cause a negative impact on one's mental health. A review published in The Lancet said that the separation from loved ones, loss of freedom, boredom, and uncertainty can cause a deterioration in an individual's mental health status...under the current global situation, both children and adults are experiencing a mix of emotions.

It Starts at the Top

It needs to be noted that the ultimate resolution to this problem starts at a much higher level than school districts and schools themselves.  Collectively, all schools want to protect their students.  The issue is a financial one.  Each district across the country is allocated a fixed amount of money each year.  These budgets must pay for learning materials, learning technology, bussing, meal programs, sports, and more.  Yes, there are occasional safety-specific grant programs here and there, but the process for obtaining a grant can be long and cumbersome, and oftentimes districts aren't even aware that they exist in the first place.

There needs to be a top-down Federal Government priority placed on funding real school safety and security initiatives.  Top-line budget line items for security must be created and funded for every school in the country.

Below are a few examples of what taxpayers have funded in the past at the direction of the Federal Government:

The above is just a pin drop in the pool of wasteful spending by our government each and every year. This is money that could be spent protecting our children.  When will we demand that school safety become a priority over this wasteful spending?

We Can Make an Impact Even Without Funding

Pause for a moment and place the costs aside.  There are other major holes in our school safety and security protocols that have very little impact on budgets. Training for an active shooter event should be a set exercise for every school nationwide. Security experts are still noting that many schools have limited training for their staff and students.  Staff is often not 100% aware of their active shooter response protocol and many states do not mandate a standardized process for school active shooter response protocols.   Most egregious of all, some schools have no active shooter protocol in place at all.

As an experienced safety expert, Jon Cross of Black Ops Technical Consulting notes, "I can go on and on about the need for multi-level security protocols. We could dig into redundancy and how 'one is none' and 'two is one'. There could be a debate about if schools are taking the correct course of action when they identify a potential threat (i.e. a student with a history) in the school. However the real issue is that we need parents to be more involved with their kids' schools."

Parents!  Do not be afraid to go in and ask about the school's active shooter response protocol.  Do not shy away from asking how the school is keeping your kids safe. Find out how often they run active shooter drills. Get a report on the results (called a whitewash) from the active shooter exercises the school has conducted.  In our busy lives, it can be easier to avoid yet another school meeting, but it has come to a point where parents need to drive change.

Download our Call to Action or contact us if you would like to learn about ways to drive change in your local schools.  We would welcome the opportunity to demonstrate our patented life-safety system for active shooter events and show you how the technology can protect your school.  We can also connect you to school-specific training and offer basic guidance on how you can be more involved in your school's security.