9/20/21 NEWPORT NEWS, VA. — Two students are expected to survive after being wounded during a shooting at a Virginia high school.

Newport News Police Chief Steve Drew said a 17-year-old boy was shot on the side of the face and a 17-year-old girl was shot in the lower leg at Heritage High School late Monday morning. Both were taken to a nearby hospital with non-life-threatening injuries and are expected to recover.

At least two others were taken to the hospital as well — one with asthma and another with an arm injury sustained when people were fleeing the school, reports CNN. The male juvenile suspect was taken into custody a few hours after the shooting and knew the victims, reports WTVR.  The school shooting suspect has been identified as a 15-year-old male who was enrolled at Heritage High School, reports WAVY. The teen’s name has not been released due to him being a minor. He was taken to Newport News juvenile services by a family member.

The boy is facing multiple charges, including aggravated malicious wounding, use of a firearm in the commission of a felony, and more. 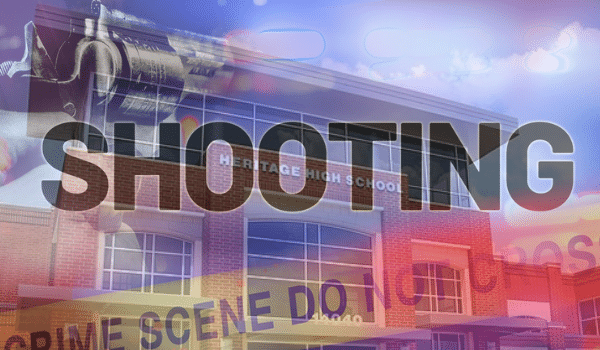 According to the police chief, there was some type of altercation leading up to the incident.  The shooting the followed prompted a call to local police at 11:38 am and school authorities immediately instructed the school into lockdown as a precaution.

Officers responded and evacuated students to nearby tennis courts where parents were instructed to meet them. Mental health counselors were on the scene as well.

Investigators recovered evidence from the school — including a gun — and are reviewing video surveillance security footage.  The Newport police are also working with the FBI, the ATF, and Virginia State Police.

The school superintendent said that the schools regularly run random security checks using dogs and metal detectors and that schools have shelter-in-place drills throughout the school year, according to USA Today. All Newport News high schools have a school resource officer (SRO) but the Heritage SRO splits time between there and Achievable Dream Academy. It is unclear if the SRO was at Heritage at the time of the shooting.

Monday night, the school division announced Heritage High School and Huntington Middle School, which has its own wing in the high school, would be closed for all students and staff.

Newport News Public Schools officials held their first board meeting one day after a shooting.  Parents at the school board meeting told members about concerns regarding safety and a perceived lack of communication from school officials.

Shera Gholson drove to Heritage to pick up her son, who attends Huntington Middle School, on Monday when she heard about the shooting. Gholson said she was bothered when police didn’t search her for any weapons when she walked into the high school.

Board members did not address public comments at the meeting, but they did speak on the shooting and what people should expect going forward.

According to Superintendent Dr. George Parker III, school officials have not received the full investigation from the police. Without knowing how the shooter entered the school and the facility protocols that were followed, Parker said officials can’t begin planning to fix any possible issues to prevent similar situations from happening again.

Until Friday, students and staff can gain access to Heritage to obtain any belongings that might’ve been left behind Monday during the rush to safety and evacuating.

The board intends to meet with staff at Heritage and Huntington to “discuss campus safety and support for virtual instruction.” It is unclear when students will return to school in person.

Solutions for Schools and Organizations

When incidents like the Heritage High School shooting happen, it's natural for us to put ourselves mentally in the same scenario.

While it is terrible to have to ask ourselves these questions, the reality is that we MUST proactively ask ourselves these questions now, before an incident happens.  Studies overwhelmingly show that, during a life-threatening event, many fine motor skills can be compromised.  The fear response is different for everyone, but one thing is universal.....getting help in a life-threatening situation is critical, and seconds count.

Having dedicated hardware that is readily accessible and easy to operate is KEY when it comes to life-saving tools.  The methodology utilized to place the ASR Alert button stations is different for every client and/or organization. By having a dedicated button that is mounted in convenient locations (such as in classrooms or near office doors) or wearing a pendant, staff can activate an alert to staff and provide law enforcement with all of the necessary information to respond with the PRESS OF A BUTTON. By depressing the ASR Alert Button, Law Enforcement Dispatch know the location name, address, location within the facility, and type of emergency.

ASR offers the best commercial critical incident response technology solution in the industry. Our reliable and redundant methods of alerting persons who are in danger, as well as providing the fastest notification to law enforcement by communicating directly with police dispatch, are not matched, and we hold the patent on this direct communication technology.

Recent events have once again reminded us of how important it is to have an emergency response plan for the possibility of an active shooter incident occurring. Although these incidents are sometimes referred to as high-severity/low-frequency events — meaning they cause extensive damage but don’t occur relatively often — there is no room for hesitation when it comes to training and being prepared for something like an active shooter situation.  These events are intense, and the stress they cause can make it almost impossible for some people to react quickly when their minds have frozen them into place while they try to figure out the best course of action. It is no longer acceptable to assume it can never happen in a particular community or building.  Let ASR show you how to prepare for the best possible outcome should an active shooter situation happen to you.  SCHEDULE A VIRTUAL DEMONSTRATION FOR YOUR ORGANIZATION TODAY.  We are confident you will see the benefits for your organization.