Dramatic Increase in Mass Shootings in 2020

Despite the US response to the Covid-19 pandemic causing many stay-at-home orders and lockdowns, as of December 13, 2020 there have been 600 mass shootings so far this year.  During a year when people were interacting LESS in public, we have seen more mass shooting violence than ever before.

According to data provided by the Gun Violence Archive, which records mass shooting deaths, this is already significantly above the 417 mass shootings recorded in the whole of 2019.

The Gun Violence Archive defines mass shootings as a minimum of four victims shot (either fatally or not) excluding any shooter killed or injured in the attack.

Despite the US response to the Covid-19 pandemic causing many stay-at-home orders and lockdowns, as of December 13, 2020 there have been 600 mass shootings so far this year. 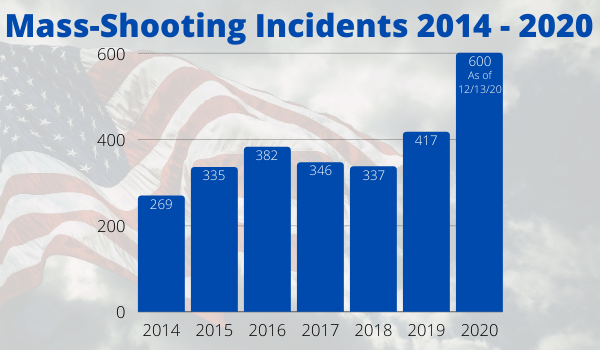 Why the Dramatic Increase in Mass Shootings in 2020?

There are a number of reasons behind this dramatic increase.

So, while the vast majority of gun-owners are law-abiding citizens that will never resort to instigating violence, there is still more opportunity for some people to commit gun-violence when more guns are available to them specifically.  With demand for firearms increasing, the FBI’s National Instant Criminal Background Checks System (NICS) struggled to keep up and provide sellers with definitive background check decisions within the required time. This weakness in the system allowed sellers to use their own discretion to sell (or not) when background checks of purchasers came back from NICS as “inconclusive”.  This means there has been large-scale potential for a normally "flagged person" to not be flagged and for them to be able to obtain a weapon that they may otherwise never have been able to acquire.

Societal Issues Leading to a Dramatic Increase in Mass Shootings in 2020?

There are are many types of mass shootings and they are not all the same.  Some attackers seek infamy or attention – and tend to kill more victims than other mass shooters. Others have extreme ideological beliefs or hatred of people who may be unlike themselves or who may believe differently than they do.  It is important to note that political divides in the US are at an extreme never before witnessed in our country.  Many people across the US are on polar-opposite spectrums of ideology when it comes to the path forward for our country and this divide is sprouting unrest that most have never experienced prior to now.

In the majority of mass shooting perpetrators, there were clearly identified triggering events which caused intolerable distress that pushed individuals into action, making their delusions become a reality.

With increased gun sales and the number of mass shootings already very high, we can expect many more in the months to come. Research has shown that mass shootings lead to other mass shootings, through general awareness and news reporting that are appealing to others who have considered undertaking mass shootings themselves.

The volatile climate we are seeing on a national level will encourage some potential mass shooters to undertake attacks and these may involve targets, victims and locations different from those typically involved, due to lockdown restrictions forcing attackers to go to where large numbers of potential victims will be.

Where do most mass-shootings happen?

These will remain attractive targets to mass shooters when densely populated and while access to firearms remains relatively easy.  Source

How Can ASR Alert Systems Help?

As the United States continues down an obvious road of division, the propensity for more mass shootings will continue to rise and play out with the loss of many innocent lives.  The fastest route to reducing loss of life in these events is to get law enforcement and first responders on the scene as quickly as possible and with as much life-saving information as possible.  While organizations cannot control the state of the world and its tensions, they can control how they protect themselves and those that spend time in their buildings.