Defunding the Police in the Age of Active Shooters 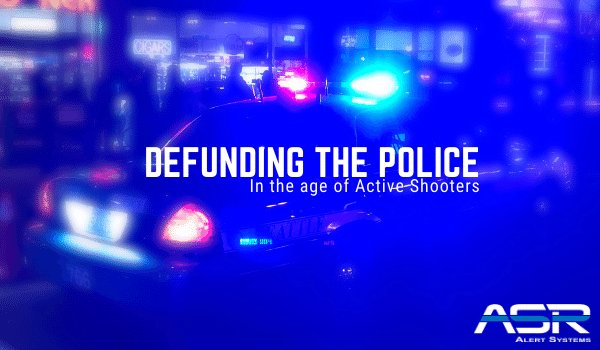 2020 has ushered in a new and alarming statistic.  It was the first year in recorded history to reach the grim milestone of 600 mass shooting incidents in the United States.  According to GunViolenceArchive.org(GVA) the 600th incident occurred on 12/13/20.  GVA uses a purely statistical threshold to define mass shootings based ONLY on the numeric value of four or more people shot or killed, not including the shooter. GVA believes that equal importance is given to the counting of those injured as well as killed in a mass shooting incident.

The FBI does not define Mass Shooting in any form. They do define Mass Killing but that includes all forms of weapon, not just guns.  In that, the criteria are simple… if four or more people are shot or killed in a single incident, not involving the shooter, that incident is categorized as a mass shooting based purely on that numerical threshold.

The incidents are there for the world to see and, since 2016, the United States has seen a steady increase in these types of active shooter events and the numbers do not appear to be heading in the right direction anytime soon.  With increased tensions related to social unrest, the Covid-19 pandemic, elections and more; its logical to assume the numbers will continue to rise.

At the same time, some cities and municipalities across the United States are seeking to defund the police.  There's a growing group of dissenters who believe Americans can survive without law enforcement as we know it.  It's as straightforward as it sounds: Instead of funding a police department, a sizable chunk of a city's budget is invested in communities, especially marginalized ones where much of the policing occurs.

According to MPD150.com, the people who respond to crises in the community should be the people who are best-equipped to deal with those crises. Rather than strangers armed with guns, who very likely do not live in the neighborhoods they’re patrolling, the desire is to create space for more mental health service providers, social workers, victim/survivor advocates, religious leaders, neighbors and friends– all of the people who really make up the fabric of a community– to look out for one another.

How Does Defunding the Police in the Age of Active Shooters Look?

So, the very obvious question springs to mind when we understand the desires of some to defund the police.  How does defunding the police in the age of active shooters look?  With fewer police officer boots on the ground, what will happen to victims of an active shooter event?

As cities begin to implement their defunding strategies,  a clear answer is unachievable as a whole because every city will be different.  What is consistent, no matter the size of the police department in a particular location, is the need for first responders to get precise and timely information about an active shooter or other crisis event so that they can respond accordingly and save lives.  With smaller departments, this information becomes even more critical.

How ASR Alert Systems Can Help

If cities continue down the path of reimagining law enforcement in the United States, its reasonable to conclude that those same cities will also need to reimagine how the reduced police force can adequately respond to crisis events like active shooters.  Now more than ever, critical life-saving information must be reliably delivered to all those under attack as well as those that will be responding to the attack.  SAVING TIME SAVES LIVES.