Mass Shootings in 2020 A Year In Review

For industry experts, 2020 was a sobering dose of reality.  Not that we don't already understand that there is a real issue facing Americans regarding mass shootings in the United States, we do.  However, 2020 was even more startling than even we could anticipate.  2020 shattered the statistics with the most recorded mass shooting incidents ever recorded in one single year.

As the novel coronavirus pandemic continues to ravage the United States, this shooting epidemic is surging at a frightening rate. Most other types of crime fell during the initial phases of the pandemic, but gun violence increased and mass shootings in particular continue to spiral out of control. There are a lot of issues  distracting the public’s attention right now, but this topic is one we are passionate about and work tirelessly to help with.

Often when people discuss mass shootings, they only focus on the number of people killed, but that overlooks the massive public toll that nonfatal shootings have on the lives of victims and the loved-ones of victims. To better take that into account, we define mass shootings as incidents in which four or more people are shot, excluding the shooter.  In a time when many are demanding we defund the police or re-imagine policing in general, it becomes even more concerning to see mass shootings on such a steep rise across the United States.

The Gun Violence Archive Recap of 2020

The chart below outlines some grim statistics relating to gun violence in America in 2020.  There were 612 mass shootings in 2020, that represents a nearly 47% increase from 2019.  Keep in mind, this rapid increase happened in a year where most of the country was under some form of lockdown or stay-at-home order for large portions of the year.  In a year when we were interacting less with the general public, nearly 47% more mass shootings occurred.

What does this tell us?  As tensions continue to rise across America, we must consider what we can do to mitigate loss of life - especially since tensions are not decreasing, but are actually INCREASING steadily.

The chart below lines out the number of mass shootings in the United States broken down by state.  Out of all the states in the U.S., only SEVEN did not have a mass shooting incident in 2020.  Only Hawaii, Montana, New Hampshire, North Dakota, Rhode Island, Vermont, and Wyoming were spared an incident.  All other 43 states and the District of Columbia (DC) were not so lucky. 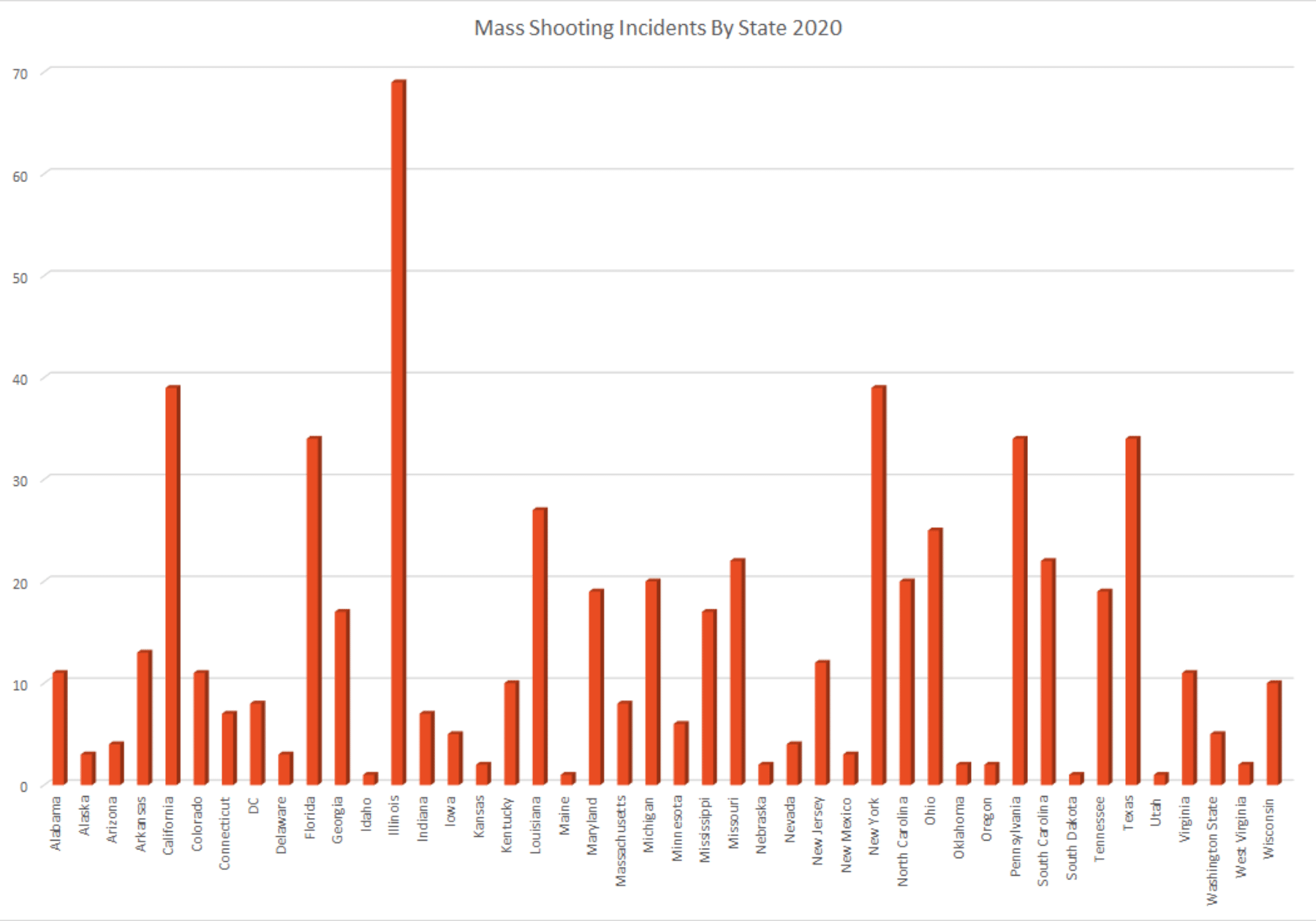 Top Six States with the Most Mass Shootings in 2020

When we take a look at incidents, there were six states that stand out regarding the number of incidents plaguing its citizens.  Illinois is especially concerning as the number of mass shootings there nearly doubled the number of the next most volatile states.

In addition, here is the breakdown of deaths and injuries that occurred in each of these top six states in 2020.

In 2020, 510 people lost their lives in mass shooting and 2,548 people were injured.  How many lives could have been saved or injuries avoided with faster response times from law enforcement?  While many mass shootings are in private locations where the incident is over nearly immediately after it begins, there are also many in which lives could have been saved had first responders had faster and more reliable information.  The more information law enforcement has and the faster and more accurately they receive it can be a matter of life and death for schools and businesses across the United States. 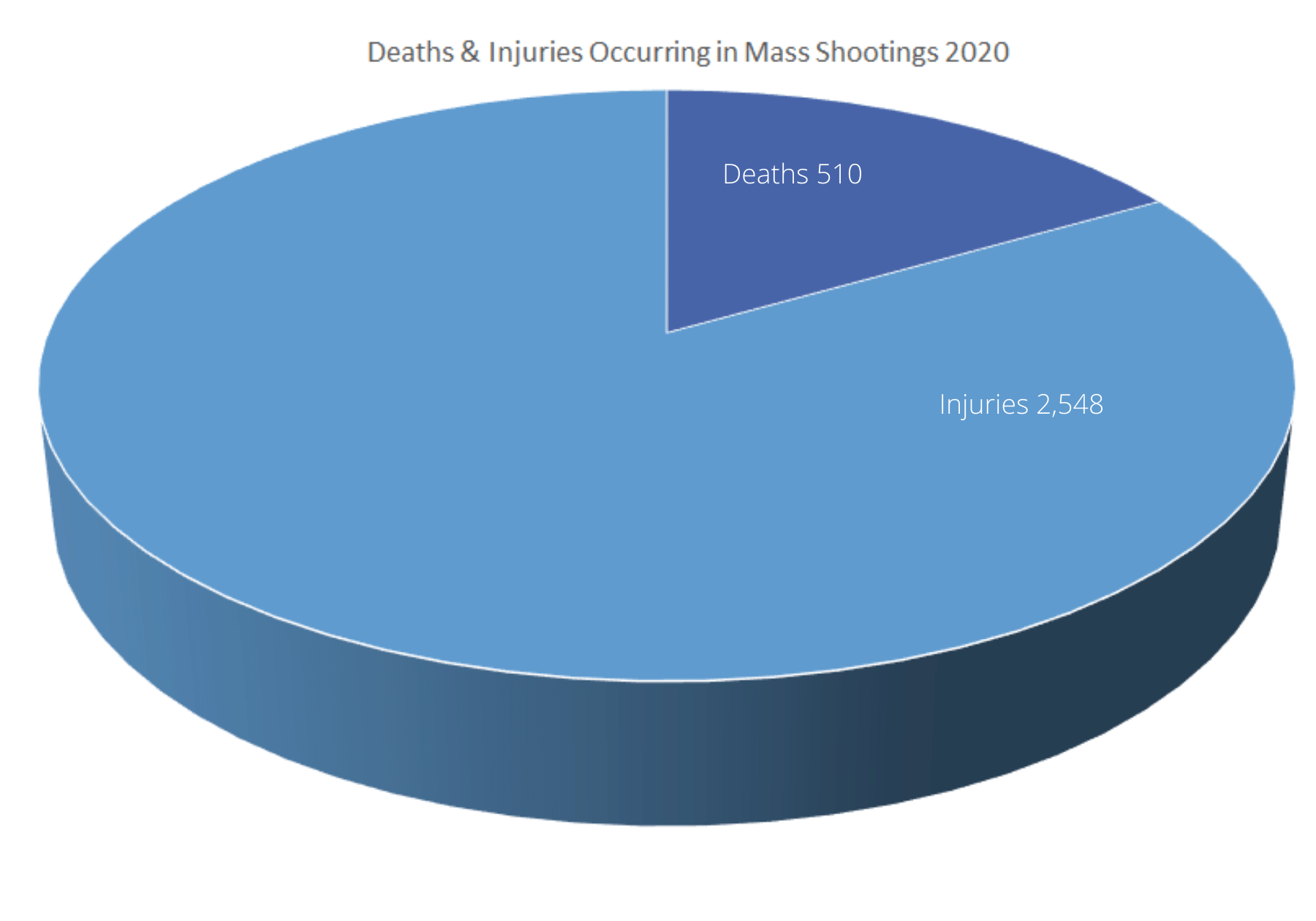 How Can ASR Alert Systems Help?

As the United States continues down an obvious mass shooting epidemic crisis path, the propensity for more mass shootings will continue to rise and play out with the loss of many innocent lives.  The fastest route to reducing loss of life in these events is to get law enforcement and first responders on the scene as quickly as possible and with as much life-saving information as possible.  While organizations cannot control the state of the world and its tensions, they can control how they protect themselves and those that spend time in their buildings.  We can help.