2021 The Deadliest Mass-Shooting Year On Record

Its October 14th, 2021, and as of the publication of this post, 2021 is ALREADY the deadliest year on record when it comes to mass shootings.  The Gun Violence Archive defines mass shootings as a minimum of four victims shot (either fatally or not) excluding any shooter killed or injured in the attack.

As of October 10, 2021, there have been 557 mass shooting incidents in the United States.  In those incidents, 2,305 people were injured and 559 have been killed.  While the number of incidents is down from 2020 (611 incidents), there are already 46 more deaths over 2020 and we still have 3 more months left in 2021.  The data is show a concerning trend.  While correlation does not always mean causation, it is noteworthy to be aware that, with the exception of 2017 and 2018, each successive year has been more deadly than the prior one.  This is seemingly highlighting a disturbing trend. 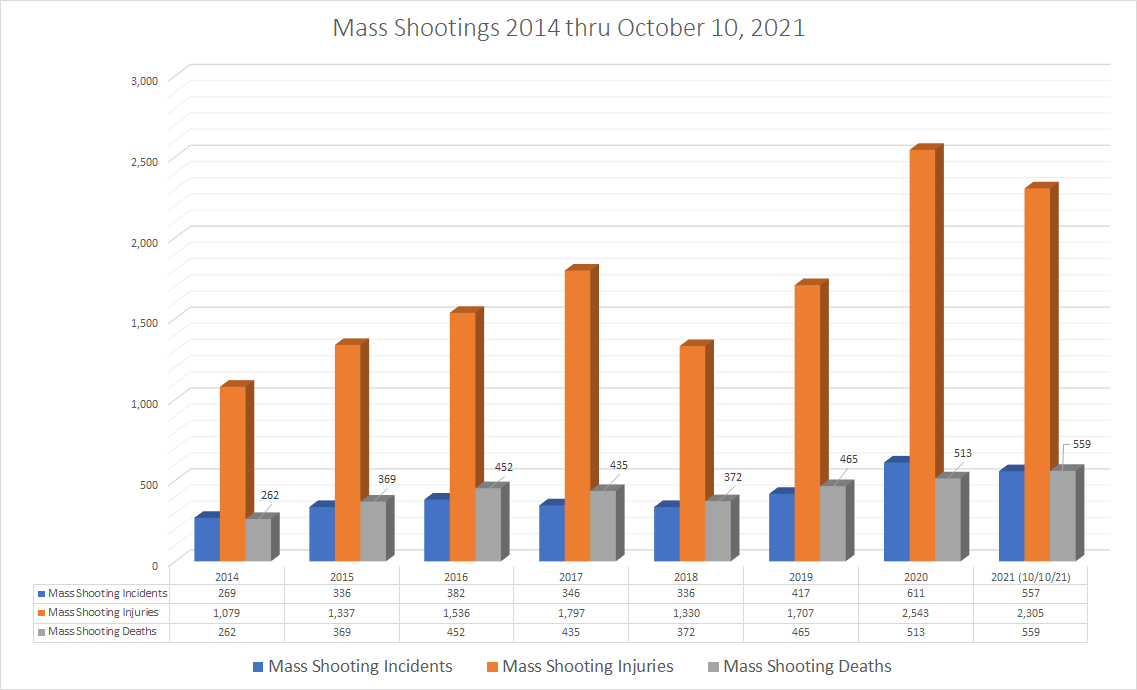 Why Is This Happening?

While there is no singular answer to this question, many professionals have weighed in with a multitude of reasons we are seeing such an uptick in violent behavior.  Each new report lines out a potential explanation.  Historically, violent behavior has been blamed on violence witnessed in movies, TV shows, and video games.  Many blame mental illness.  Others blame guns.  Still, others blame a society wrought with a victimhood mentality that leads to violent behavior as retribution for a perceived wrong.  Some point toward genetic abnormalities or medical ailments (such as tumors) to explain the violence.  There is also a lot of focus on social media influence being to blame as well.

The major issue we face in trying to come up with a specific reason, or recipe, for violent behavior, is that not one shooter absolutely resembles the "profile" of another shooter.  While there may be common threads among some, those same shooters will be vastly different in other ways.  Where there may have been obvious signs (as evaluated after the fact) in some, there may have been none of the same "obvious signs" in others.   For example:

What is easy to agree upon is that the rise of the American mass shooting epidemic is likely a toxic cocktail of many different elements clashing together, resulting in catastrophic outcomes.  As a society, we haven't even breached the surface of a solution to identify a mass shooter before he/she acts, let alone figure out a way we can stop them.  There clearly isn't a magic pill solution today, nor will there be one in the foreseeable future.

So What Can We Do?

It's not all dark clouds and terrifying statistics.  There is a LOT we can do to protect ourselves should tragedy strike us. and it boils down to two things:

An active shooter is an individual actively engaged in killing or attempting to kill people in a confined and populated area, typically through the use of firearms.

You have three options:
When Law Enforcement Arrives:

Traditionally, when faced with a crisis, we have learned to call 911.  What most people do NOT know is that relaying critical information to first responders is oftentimes extremely difficult and sometimes next to impossible.  Here is just some of the information a 911 operator will ask you.

But what if you don't have your cell phone on you or a landline nearby?  What if you have no cell signal in your building?  What if you are hiding and have to be absolutely silent so the shooter won't find you?  Most protocols also indicate to call 911 after you are safe, which of course makes sense, but it also takes valuable time.

The Result - First Responders are arriving on scene 4.5 minutes AFTER the active shooter crisis has ended.

Technology as a Solution

Technology can be your best asset when faced with a life-threatening emergency.  Critical Incident Response Technology is technology dedicated to alerting first responders of a crisis situation at a school, business, building, or event (indoor or outdoor).  The technology does the communicating for you so that you can focus on life-saving decision-making.

With the press of a button, officers & dispatch are directly notified of the incident, along with the address and location within the building. They know what is happening, where it is happening, who it is happening to and help is on the way immediately. This significantly reduces response time from Law Enforcement while also notifying all those under attack within the organization or building.

While we can't predict an active shooter event, we can plan for the best possible outcomes when they occur.  As these events continue to occur more frequently and have subsequently become more and more deadly every year, it is imperative that organizations prepare accordingly.  We can no longer say, "it can't happen here" because that is a mistake you can't afford to make.  If you do, it could cost you your life and those lives that you have a responsibility to protect in your buildings.